Styled-components, what are they? The result of thinking about how to enhance the CSS for component systems styling in React. A JavaScript subset, it mainly provides static classes, interfaces, as well as static typing.

One of the most noticeable TypeScript pros is enabling IDEs to provide a richer environment that could see common errors in code typing. It streamlines Java code, which makes reading and debugging so much easier.

Use TypeScript with Styled Components

It’s great to use styled-components with React, as well as React native. However, it truly shines when using it with VS Code, getting suggestions about the code and errors when writing an error. The components help keep problems regarding the separation of styling and architecture, which makes for a more readable code.

In addition, should there be components relying on JavaScript, the components provide control over the states, and then back to CSS, and not using many conditional class names instead. When transitioning most projects to include TypeScript, some things would feel perfect. Consider checking them out.

Styled components do not ship with types. Rather, you need to install it from the repository called the Definitely Typed.

Using a CSS in a JavaScript solution has one particular major advantage, and this the ability of passing customized props on the runtime, as well as accordingly adapting CSS.

Similar to JSX elements, the generic type could be passed after the component with <>. Now, what you have is a typed styled-component, and thus will become a static element error if unable to pass the active prop.

To extend the component, you can use it like this:

Keep in mind however that active as a prop is passed to the Title component even if not explicitly stated so. Later, if someone adds an optional prop to the component, this could be a concern. You can nonetheless refactor to avoid this, such as:

This syntax however obviously is more intricate, and builds additional component. If the mess is worth uncovering an accidental prop, it would be your decision.

With the help of the ThemeProvider, Styled Components could specify a theme. The autocomplete form itself form the theme object is worth doing even if you steer away from everything else.

The first thing to do is to build a declarations file. For instance, we shall call it styled.d.ts.

Typing the theme manually like this is hard however, mainly due to the fact that every time you add or remove something form the theme object, you have to edit a couple of files. Rather, consider doing this:

We make use of the type inference of TypeScript here for the theme object to do it.

In the Styled Components documentation, there are a couple of CSS functions. Here specifically is the attribute of CSS that could be utilized on an element when a Babel plugin is enabled.

Unfortunately, TypeScript does not know about this CSS property, and makes an error.

To resolve this, consider the following styled.d.ts:

Specifying media queries from documentation has an easy way. However, while the syntax is user-friendly, the implementation is difficult to reason for TypeScript, and for new users too as it happens. Consider the following seamless option:

The Pros of TypeScript

1. Makes less bulky components. There would be plenty of heavy lifting done via the CSS for injecting styling towards a component that’s user-centered. Majority of the methods id render components end up with style objects, which clutter and splits the CSS into two, making the code parsing process difficult. Styled components however keep the element architecture and styling separated, and make more readable components.

2. CSS Function. Props could be used to render CSS conditionally, meaning that there’s no need to render conditional classes names that are props-based. This minimizes components clutter, and maintaining a separation of issues between JavaScript and CSS.

3. ThemeProvider. Severing as the wrapper, it injects props into all the child components. It’s significantly useful when creating a ‘configuration’ page, which is a duplicate page essentially, letting users perform customizations to specific stylistic elements, such as color in particular.

4. Test. Testing of the styled components is painless through building class names that are consistent. Moreover, it also enables asserting certain CSS rules, which could be relevant to the app’s integrity.

Styled-components overall, have made creating apps with TypeScript more enjoyable. The styles are a neat approach to scoping styles. TypeScript could be leveraged to have a strong-typing in props passed to the styled components.

The styled components have over 5.7 million downloads per month from npm, more than 27.8 GitHub stars, as well as hundreds of open source contributors, thus it’s here to stay.

V K Chaudhary working as a project manager in a software development company Tatvasoft.com. He is a technical geek and also managing some online campaigns for his company. 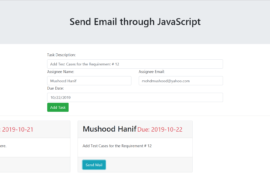 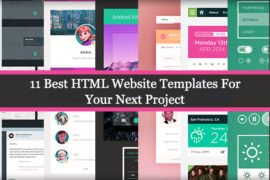 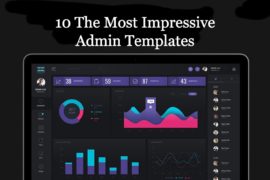 10 The Most Impressive Admin Templates